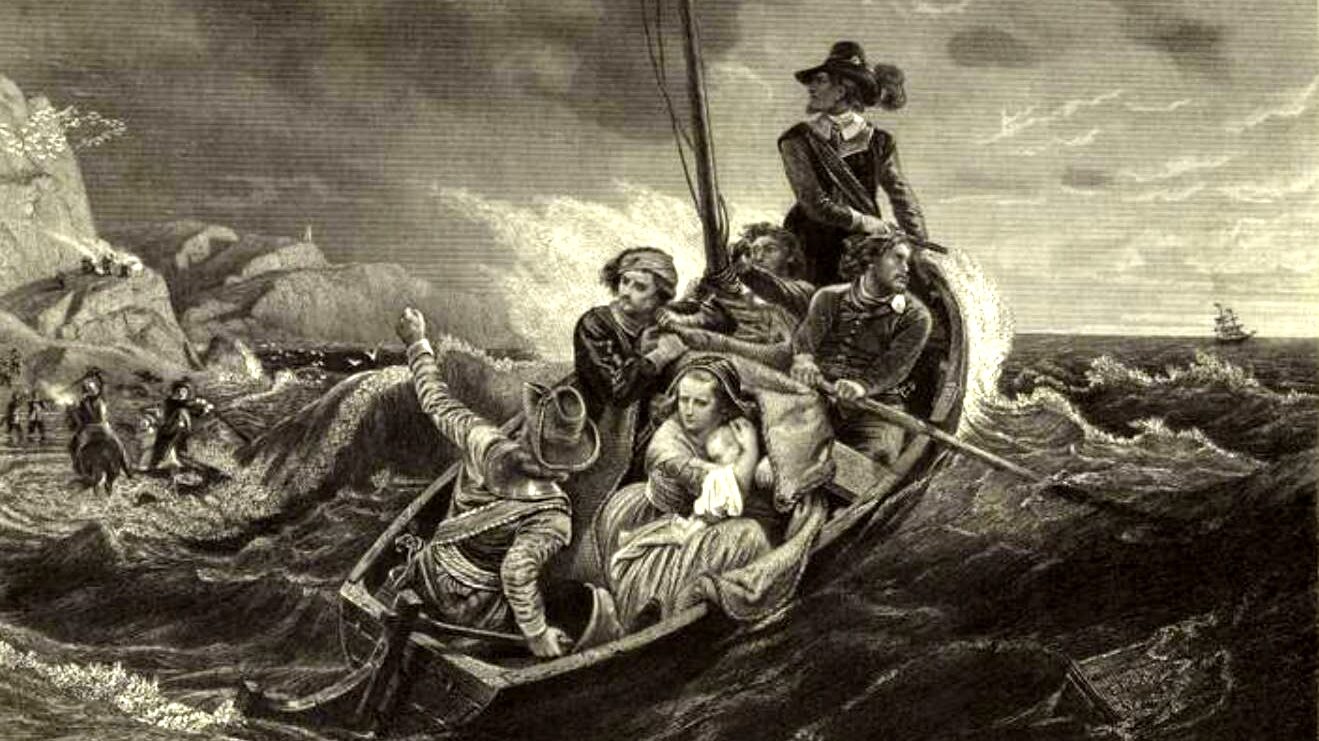 Discover who and why some left

Britain to build a New World.

The demands of the New World brought a desperate need for labour and the introduction of Indentured Servants.

The founders of America devised a system of forced labour in the 17th century which would last for two centuries. Men, women and children were bought and sold like cattle and used as currency in labour and the purchase of land. They were transported across the seas in foul conditions and were lucky to arrive healthy or even alive.

The majority crossed the Atlantic as indentured servants to masters in the West Indies and the North American colonies between 1654 and 1679.

The system of Indentured Servants was based on the old British apprenticeship sytem but in this case a person had to sell themselves for two to seven years (some a lifetime). This would pay the cost of transportation to America, whether the servant wanted to go or not and at the end of that period they received land, money or tools sufficient to enable them to become settlers if they wished. Convicts were also enrolled  for 7-14 years instead of imprisonment. Also transported were non-conformist religious rebels, illegitimate children, children of the poor, deserting husbands or wives and child runaways.

Early entries give the date of enrolment, servant’s name and place of origin, master’s name, destination, term of years and conditions of service.

For the very first time, to our knowledge, this whole book has been transcribed and digitised into genealogically precious data to do justice to the original endeavours. The database shows non-conformists, where they lived and how they were treated: The Establishment, Judiciary and Law and Order. Even spies and spiteful clergy…

Fourteen year old clerk, John Hunter, was transported in 1753 to Jamaica. There are cottages in that small village that pre-exist his journey and are still there today.

Voyagers on the Hopewell, 1635

Griggs, Cooper & Co as they appear in the database.

Note that the Griggs family were described in the original source document as having left “Landen.” This was assumed to have been Lavenden, Buckinghamshire, England. Buckinghamshire (or “Bucks.”) is one of the home counties outside London. Although Lavenden is possible it may be that the speaker was illiterate, did not know how to spell the name of the capital, chose the nearest large city and pronounced his home as “Landen” in a Londoner’s accent. This would then have been recorded as it was spoken.

In the following contract, dated June 20, 1654, Richard Garford of London agrees to act as a broker and provide an indentured servant to Thomas Workman of Lower Norfolk County, Virginia.

Be it known unto all men by these presents that I Richard Garfford of London Inhoulder doe Confess and acknowledge my selfe to owe and stand indebted unto Thomas Workman of the Little Creeke in the County of Lower Norffolk in Virginia, planter, his Executors Administrators or assignes the full and Just some of Tenn pounds of good and lawfull money of England to be paid uppon demand of the abovesaid Thomas Workman or his true and lawfull Atterny or Attornyes at the now dwelling house of Mr. Willyam Garford Innkeeper at the Red Lyon in fleet streete without either Equevocation fraud or delay, and to the true performance of the same well and truly to bee made and done I bind my selfe my Executors Administtators and Assignes, firmly by these presents in witnesse heereof I have hereunto sett my hand and seale this 4th day of Aprill 1653

The Condition of this obligation is such that the within bounden Richard Garford or his Assignes shall well and truly deliver or cause to be delivered unto the above mentioned Thomas Workman, his Executors Administrators or assignes here in Virginia a sound and able man servant betweene Eighteene and 25 yeres of age that shall have fower yeres to serve at the least, and that in the first second or third shipp that shall arrive in the Port of James River in Virginia from London, that then the bond above to be voyd and of noe effect or else to stand in full force and vertue

Sealed and delivered in the presence of Thomas Ward

The Whole Duty of Man – The Servant’s Obligations

The duties expected of the 17th century servant were outlined in The Whole Duty of Man published in 1658.

“The Whole Duty of Man” (Obligations of Master and Servant)

Extract- Duties of the Servant

25. That of the Servant is, first, Obedience to all lawful Commands.

26. The second Duty of the Servant is Faithfulness…the doing of all true Service to his Master, not only when his Eye is over him and he expects Punishment for the Omission, but at all Times, even when his Master is not likely to discern his Failing;

27. A third Duty of a Servant is Patience and Meekness under the Reproofs of his Master, not answering again, …that is, not making such surly and rude Replies, as may increase the Master’s Displeasure, a Thing too frequent among Servants, even in the justest Reprehensions.

28. A fourth Duty of a Servant is Diligence. He must constantly attend to all those Things which are the Duties of his Place, and not give himself to Idleness and Sloth, nor yet to Company-keeping, Gaming or any other disorderly Course, which may take him off from his Master’s Business.

Extract- Duties of the Master

31. But as it is the Duty of Masters to admonish and reprove their Servants, so they must also look to do it in a due Manner, that is, so as may be most likely to do good; not in Passion and Rage, which can never work the Servant to any Thing but the despising or hating him; but with such sober and grave Speeches, as may convince him of his Fault, and may also assure him, that it is a kind Desire of his Amendment (and not a Willingness to wreck his own Rage) which makes the Master thus to rebuke him.

32. … set good Example of Honesty and Godliness to his Servants, without which ’tis not all the Exhortations or Reproofs he can use, will ever do good; or else he pulls down more with his Example, than ’tis possible for him to build up with the other: And ’tis Madness for a drunken or profane Master to expect a sober and godly Family.

33. The Master is to provide that his Servants may not want Means of being instructed in their Duty, as also that they may daily have constant Times of worshipping God publickly, by having Prayers in the Family.

34. The Master, in all Affairs of his own, is to give reasonable and moderate Commands, not laying greater Burdens on his Servants, than they are able to bear, particularly, not requiring so much Work, that they shall have no Time to bestow on their Souls; as on the other Side, he is not to permit them to live so idly, as may make them either useless to him, or may betray themselves to any ill.

35. The Master is to give his Servants Encouragement in Well doing, by using them with that Bounty and Kindness, which their Faithfulness, and Diligence, and Piety deserves…

Virginia and Maryland also received many prisoners from English gaols, estimated at over 50,000 convicts, many designated as slaves upon conviction. Added to those kidnapped were polictic prisoners, Irish priests, defeted and deserting soldiers, Quakers and other dissenters.

When the ships arrived in America, the dead were thrown overboard and survivors were made ready for sale.

On 29 September 1654, Bristol city’s Common Council introduced an ordinance to prevent the ‘inveigling, purloining, carrying and stealing away’ of ‘boyes, maides and other persons, and transporting them beyond the seas & there selling or otherwise disposing of them for private gain & profit.’

As a result, the Council required all indentured servants to be registered before they left Bristol to work overseas and these servants were all listed in registers known as ‘Servants to Foreign Plantations.’ Each person’s name was recorded, with details of their destination, their master and the terms of their employment.

The Bristol registers cover the period 1654 to 1686 and are the largest body of indenture records known. Of the total of 10,000 servants in Bristol registers, almost all came from the West Country, the West Midlands, or from Wales but many more came from other parts of England.